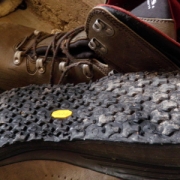 Agent Mulder, of X-Files fame, had a poster in his office
that said, “I WANT TO BELIEVE.” Well, I wanted to believe too.
Unfortunately, belief only gets you so far when pitted against
truth and hard facts.

Last year, I replaced my felt-bottom Simms wading boots
with their new and improved rubber-soled boots, not because
of a burning desire to be politically/environmentally correct,
but because after several years of heavy use, my felt-bottom
boots had simply worn out and I was in need of a new pair.
Leading up to my purchase, rubber-soled boots had really
come into their own. Glowing reviews touting rubber’s
superiority to felt graced the pages of every fly fishing
magazine, website and catalog I came across. Throw in the
environmental benefits, and I had to wonder how I could go
wrong. Sure, there were occasional complaints from frustrated
anglers, but clearly these complainers were unpatriotic, anti-
environmental Americans, that would slip no matter what
footware they were wearing. In the end, the glowing reviews,
combined with the fact that most manufactures didn’t even
offer felt-bottom boots anymore, got the best of me. I bought
the rubber-soled boots.

My boots arrived and looked great. I wondered aloud to a
friend how anyone could complain about them. I mean, it’s not
like felt was the greatest thing in the world. I’d slipped in my
old boots countless times, especially when scrambling down
damp, grass covered hills. And felt’s horrible performance in
the snow; bring on the rubber! I couldn’t wait to wear my new
boots and see what the new world of wading technology had to
offer me.

Unfortunately, the new technology didn’t live up to the
hype. I quickly realized the negative comments WERE
justified. In my new boots, I might as well been walking on
polished ice; slipping and sliding along in the streams and
rivers I used to wade with ease. Wading in these boots gave
me all the consequences of heavy whiskey drinking without
any of the fun. To put it bluntly, my rubber-soled boots were
horrible!

And things haven’t changed. The soles haven’t softened or
broken in and made wading easier. I still slip and stumble
along the river bottom. Word seems to be getting out and the
industry has responded, recommending that carbon-tipped
studs be put in the rubber-soles. They claim that with such
improvements, the boots work great. Now, it seems to me that
if you have to implant metal spikes into your boots (boots that
cost good money) to make them functional, then your boots
are no good. I could make a lot of footwear appropriate for
wading if all that is required is putting metal spikes through
their soles!

In the end, I don’t want to put metal spikes into my boots.
I don’t want to walk around with carbon-tips tearing into the
ground, my car and my boat! I just want my felt back. Surely
in this day in age, someone can make a fishing boot that works
slightly better than any pair of worn out, grass stained
sneakers!

I wanted to believe, but I don’t 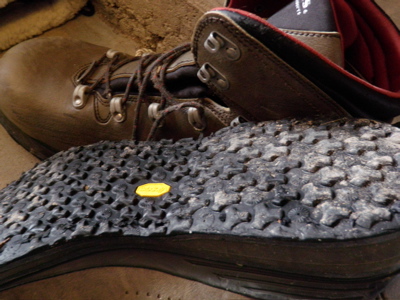 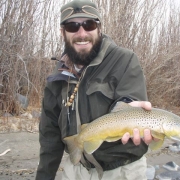 I managed to hightail it out of Jackson yesterday morning
and meet up with my friend Leon. Leon resides in a slightly
warmer part of Wyoming (if there is such a place), and is a
nymphing master. He doesn’t believe in strike indicators, which
is refreshing in this day and age where bobbers have become an
accepted accoutrement on the end of a fly line. He’s taught me a
lot over the years about short line nymphing and fooling brown
trout with his trademark fly creations. We had a great time
catching up and fooling a few fish. I hope to fish with him a few
more times before the runoff begins. Here’s a brown that fell for
my Leggy Bastard…. 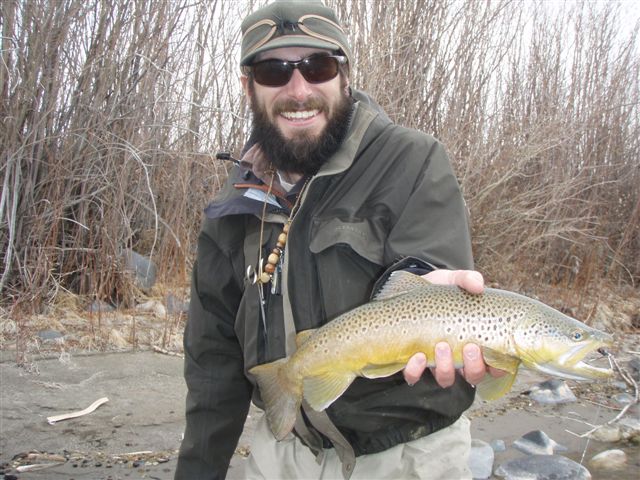 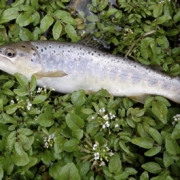 With spring coming (slowly), I’ve begun daydreaming
about upcoming fishing trips. Some trips are planned already-
two weeks of bonefishing and relaxing in the Bahamas, a
weekend road trip for Wyoming trout, and Yellowstone’s
opener. Others are only starting to materialize. And it’s these
trips, the ones to new waters closer to home, that have me
most excited.

Every season, in addition to my usual haunts, I try to
explore new trout water. I’m hoping that this season will be no
different. It could be a new stretch in a familiar drainage or a
completely different stream, just so long as it’s fishable! And,
while I enjoy fishing the big rivers around here (ie. The Snake,
Hoback, Gros Ventre), it’s the small streams that really
intrigue me. I’ve already begun studying local maps, noting
small blue lines and off the beaten path places that I’ve
meaning to get too, but haven’t yet.

Two such places stand out from last season.

On a hot day in early July, when it was clear that our first
choice fishery wasn’t in the mood to cooperate, my friend and I
decided to jump ship and explore lesser known water. This
particular stream, the kind of water that gets passed over
when headed to more popular locales, had caught my eye
years earlier. It turned out to be a great choice, offering us
new country and plenty of small, eager brown and cutthroat
trout. 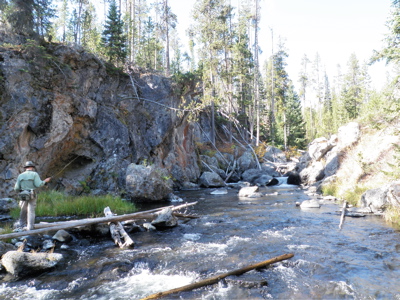 Another was found haphazardly after scouting a prominent
river in southern Wyoming. This one was a real gem; a small
spring creek rising up from the ground, stuffed with aquatic
grasses and some of the most beautiful brown trout I have
had the pleasure of catching. Despite thunderstorms reining
over us in the little canyon (you shouldn’t fish in
thunderstorms), Sage and I moseyed through thigh high, ochre
colored grass, casting Blue Wing Olive to hungry trout. 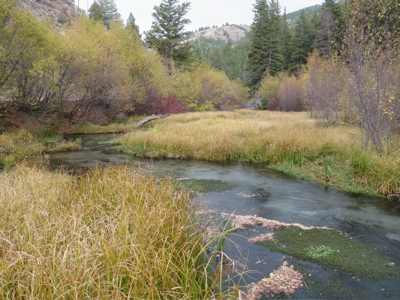 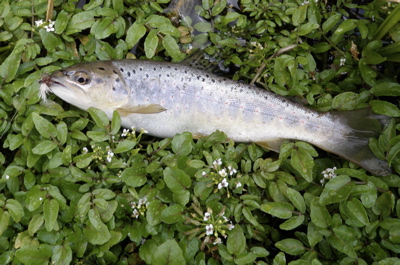 Exploring streams like these make my fishing seasons
complete. Most don’t offer the biggest fish in the world
(although there are surprises!), but they do give me the sense
of adventure and discovery that is increasingly harder to find
in the world today. Hope you have a few adventures of your
own planned for 2011!

I came across this article about the future of Yellowstone’s
trout. After taking comments from the public, it looks like the
Park Service has a come up with a draft plan for future trout
management. Seems pretty reasonable to me (haven’t waded
through the details though).

Lake trout have become a huge problem in the park and
hopefully these recommendations will help reduce their
numbers, allowing the native cutthroat trout population to
rebound. Also, reintroducing native cutthroat and grayling to
historical waters makes sense, although it’s interesting that
the Madison, lower Firehole and Gibbon rivers wouldn’t be
included. Historically, these waters contained native cutthroat
trout and grayling, while no fish resided in the upper Firehole
(above the falls). I imagine that people wouldn’t want to see
such a world class brown and rainbow fishery destroyed
(Selfishly, I don’t know that I would). Plus, I don’t even know
if it would be possible, for the brown and rainbows have been
residing in those waters for close to 100 years now, making
them full fledged Yellowstone residents.

If you’re interested in Yellowstone and its fishing history,
Yellowstone Fishes-
Ecology, History and Angling in the Park by John D.
Varley and Paul Schullery, is a great book to read. 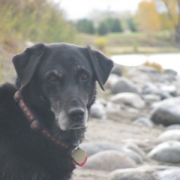 We learned that Sage, our 12 year old black lab (and
fishing
companion), has cancer. We took her to the vet on Monday to
have a lump checked out and yesterday she had it removed
(thanks Heather). She’s handling things like a champion despite
the stitches and large bandages around her abdomen. I’m not
sure how’s she’s going to handle not being able to do anything
active for two weeks!

Hopefully by having the tumor (and some
muscle) removed, we caught things before they spread, but
we
won’t know until results come back. Her spirit has been great
and apparently her blood work looked great. I’m keeping my
fingers crossed and hope she’ll come out ahead and be able to
get in another fishing season. I can’t imagine exploring western
waters without her. Here’s a shot of Sage supervising things
along the Yellowstone last fall. 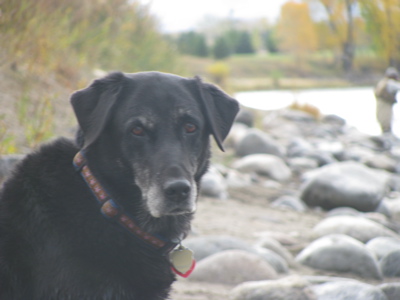 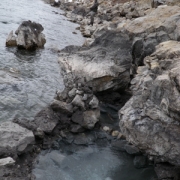 One of the unique things about fly fishing around Jackson
Hole, is that occasionally you find yourself fishing waters that
have hot springs bubbling into them (and the smell of sulfur in
the air). Here’s a shot of someone’s personal hot “tub” we came
across while fishing yesterday. 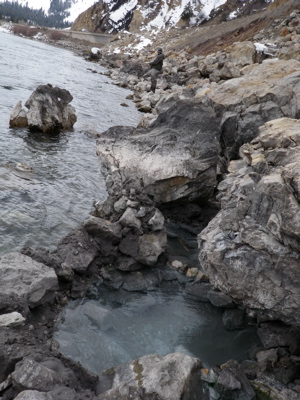 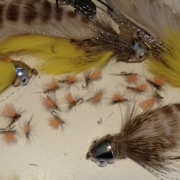 Today, being the snowy day that it was, seemed like a
great day for fly tying. As some of you know, I tie enough
flies over the winter (and throughout the season) to outfit
myself and my Teton Fly Fishing clients (not to mention some
fishing friends). My winter tying goes in waves. Some days,
dozens of flies are tied, while I succumb other days to
distractions like art projects or my guitars. Overall I’ve been
making good progress this winter; there are still patterns to
be tied, but overall the fly boxes are looking good.

This morning I hit the extremes of the fly tying spectrum. I
started by (with the help of some coffee) tying a dozen and a
half size 20 Blue Wing Olive parachute dry flies; a great
pattern to carry here in the western Rockies, as the BWO are
often the first and last major hatch of the season. After
finishing them, I moved on to some size 4 conehead
streamers; imagining how quickly they would get down under
cut banks and logs, bring large Green River brown trout and
Snake River cutthroat to their knees. 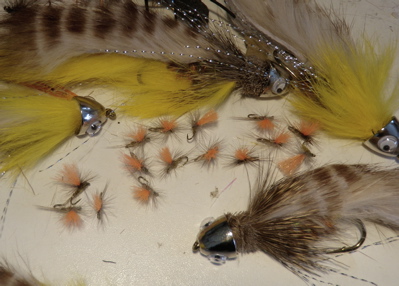 When I was finished, I got to thinking how funny (and
interesting) it is that trout will feed so willingly on such tiny
bugs one minute, while chasing such large flies the next. A
dead drift along a seam or violent strips under a log. The
choice is yours.