Last night, fisheries biologists from Yellowstone National
Park and members of Wyoming Trout Unlimited gave a great
presentation on the Parks ongoing efforts to save and restore
native cutthroat trout populations. As some of you know, the
park has been waging an aggressive campaign to save the
Yellowstone lake cutthroat by killing invasive Lake Trout.

Lake Trout (mackinaw) were illegally introduced to
Yellowstone lake somtime in the ’80s and have dramatically
reduced the native cutthroat trout in the lake over the years.
Fortunately the Park is making progress fighting the invasion,
killing more and more Lakers over the years. Unfortunately
there’s a lot of misinformation out there waged by a select
few folks who like catching lake trout and have a surplus of
time on their hands. It’s clear that Lake trout are killing
Yellowstone cutthroat and wreck havoc on the entire
ecosystem; an ecosystem that depends on the Yellowstone
Lake cutthroat to thrive. I for one am glad the Park and its
supporters are working so hard to save and protect this
amazing fishery.

Also, the Park is in the process of restoring native
Grayling, Yellowstone and Westslope Cutthroat to a few select
streams in the park. Check out the link below to learn more
about the Parks management plan and learn facts about their
battle.

Here’s a recent article by Ted Williams that appears in this
springs “Fly Rod and Reel Magazine”: 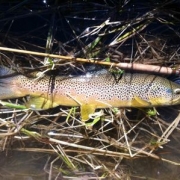 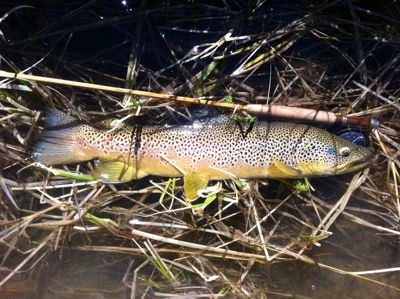 Turns out, simple CAN be better. A few days back I ran
over to Dubois to do a little preseason work on the cabin.
Since the weather was lousy and I was planning to only spend
a night, I didn’t take my fishing gear with me. Once there
though I started thinking about fishing; turns out the weather
wasn’t quite as bad as predicted and Jamie told me to stay
and she’d come over with some friends at the end of the
week. With an unexpected free day, thinking
about fishing turned to going fishing. The only
problem was that my gear was at home. Fortunately I
remembered having a 4wt bamboo rod at the cabin as well as
a cheap reel with embarrassingly old fly line on it. Combine
those with one fly box of random patterns and a few spools of
tippet, and I was in business!

So off I drove, determined to make the most of my day.
To make a long story short, the wind was better than expected
and I found fish rising occasionally to emerging midges. For
the better part of the morning and early afternoon I had a
blast trying to control angry brown trout with my uber-slow,
soft tipped 4 wt rod. 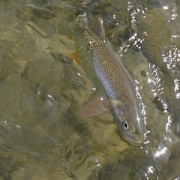 As many folks know, spring fishing in Jackson can be exceptional, with hungry fish, hatches of various insects and sunshine. For those willing to brave varying temperatures, they can have water to themselves and catch some of the biggest trout of the season.

I snuck out yesterday for a few hours on the water in between a laundry list of tasks. Fishing was good and I caught a bunch of cutthroat trout on various dries, including a big foam Skwala pattern and small black stoneflies and parachute adams. Riffles proved the best, with numerous yellow cutts slashing the surface, feeding on midges. 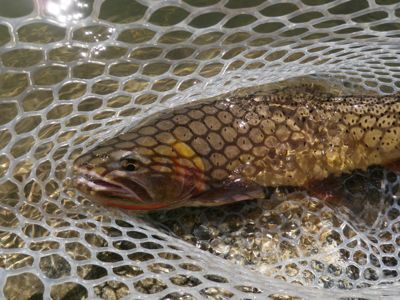 Nice heathly cutthroat; first of the season caught with foam and rubber legs 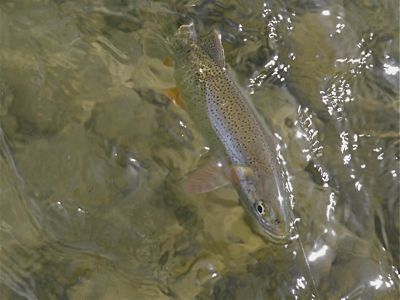 One of many spunky fish from a productive riffle…

Embracing the sunny skies, Jamie and I made a run to the
Henry’s Fork on Tuesday, hoping to find some willing trout and
warmer weather. I’d say overall we were successful.
Temperatures were warm enough to leave puffy jackets in the
car, although water temps made it clear we aren’t out of the
woods yet. We took turns fishing nymphs and a few dries.
Despite the occasional riser, all of our fish were caught
subsurface. After the wind kicked up, we packed up and headed
home. Along the way, our friend Joe and his wife invited us to
stop by their house in Victor for a beer. We did and it was
glorious. After that, Jamie and I decided to round things out with
a stop at Big Hole BBQ in Victor. 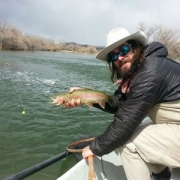 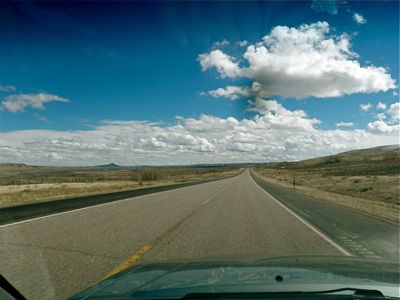 on the open road; headed to Lander, WY without
company….

Last week my friend Jeff, picked up his new drift boat in
Idaho Falls. After arriving back home in Lander, WY, Jeff
invited me to come out and join him for the inaugural float.
With an open schedule and already being nearby in Dubois, I
threw some gear in the Pathfinder and headed east, arriving in
Lander with just enough time to hit up the Popo Agie with Jeff.
We had a great time fishing nymphs and streamers, picking up
a few trout and enjoying the relatively warm weather. After
the sun dipped behind the red hills,we celebrated our
afternoon with a trip to the Lander Bar for burgers and beer.

The next day we hooked up Jeff’s new Clacka and headed
north to Thermopolis to fish the Big Horn. The Bighorn is the
Wind River; name changes upon coming out of the Wind River
Canyon (courtesy of the white man…). Along with Jeff’s sweet
black lab, Cora, we took our time floating and fishing the river.
While we got into some fish subsurface, the highlight for me
was when BWO blanketed the water and brought fish to the
surface. We opted to take their challenge, fishing size 20 BWOs
on fine tippet, connecting with several nice browns and
rainbows. Jeff rounded out the day, catching a feisty ‘bow on a
streamer. 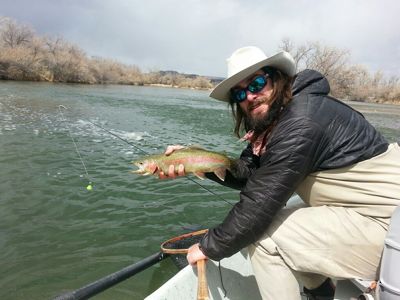 A nice rainbow falls victim to the red worm…