Here’s my collection of Cree and Cree related
Hackles; how do they stack up against brown and grizzly?

Cree Hackle is a mythical beast; one feather that does it
all and is as rare (and expensive) these days as a a white
buffalo. For those fly tiers out there who aren’t familiar with
this rare colored rooster hackle, cree is basically a grizzly
hackle with brown and ginger mixed in, making it, in theory,
perfect for tying Adams/parachute adams or any other dry
flies that require the magic mix of brown and grizzly hackle.

I tie a lot of flies and am somewhat of a hoarder when it
comes to dry fly hackle (both rooster necks and saddles).
Additionally, like a lot of anglers, the parachute adams dry fly
is one of my “go-to” patterns, both for personal use and when
guiding clients on rivers like the Snake here in Jackson Hole. I
tie a lot of them and am always looking for a quicker way to
tie. Last year I set out on a quest to find cree hackle to
incorporate into my patterns. After talking with the good folks
at Whiting, I learned that they don’t even offer Cree necks
anymore since they are so rare and demand so high (i’m sure
someone gets the rare one now and then, but not tyers like
me). They did recommend and send me a barred dark ginger
cape though, saying it’s a good cree substitute. I also ended
up ordering a “chili pepper” cape from Clearwater Hackle in
Idaho; their version of cree. Then I hit the jackpot. While
shopping in Idaho Falls, I came across four Metz cree capes at
Sportsman’s Warehouse. FOUR! I did what any self-respecting
fly tier would do and bought three; figuring such an
opportunity might never happen again. After tying with them
on and off for a while now, I thought I conduct a little
“research” to see how my different hackles stack up, and if all
or any of them are a true substitute for the tried and true one
grizzly/one brown hackle.

All flies were tied parachute style on a size 12 hook.
Here’s the subjects, the results and my thoughts…. Sorry for
the lousy photos.

Fly 1:Traditional parachute adams tied with both a grizzly
and brown hackle that came from Whiting rooster necks. 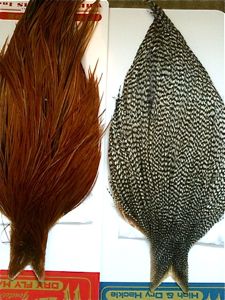 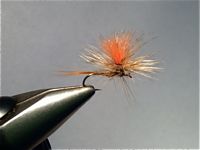 My Whiting brown and grizzly rooster necks; the
standards for which all are judged.

Fly 2:tied with a barred dark ginger feather from a Whiting
neck. 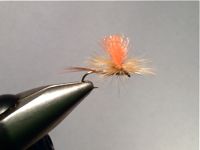 Whiting recommends this color hackle as a close
replacement for cree. On the neck I have, the larger size
feathers definitely look to be cree. The smaller sizes however
are primarily of the brown/ginger barring, lacking the black.
Overall though I would agree that this is pretty close to cree
and I bet if you found a few to pick through at a retail shop you
could get one pretty close to your objective. When tied, I
found that the hackle on this fly was on the lighter shade-
more ginger in color and lacking darkness. Overall though it
looks buggy and is great for certain patterns…

Fly 3:tied with a cree feather from one of my Metz necks. 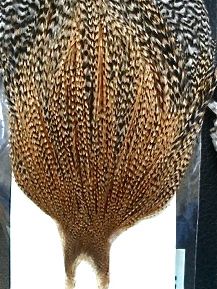 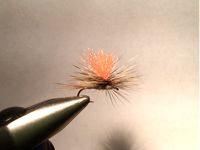 These feathers are the real deal and are what I’m judging
all others on. I was pretty pleased with how this fly turned
out; definitely had the black barring and buggy look. The
browns are not quite a prevalent compared to using two
hackles. These feathers make tying small adams, caddis, etc.
easy.

Fly 4:tied with a chili pepper feather from a Clearwater
hackle neck. 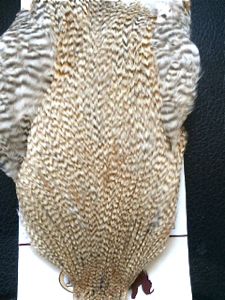 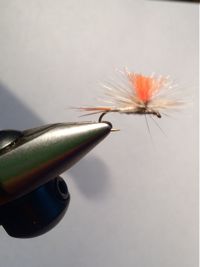 Clearwater’s a newer player in the hackle game, but do a
nice job. Their necks are affordable, have lots of feathers and
the customer service is great. Their feathers are much shorter
than say Whiting and remind me of the old dry fly necks I
started tying with years back. The chili pepper color is their
version of cree. The neck I was sent doesn’t quite have the
black barring found on cree necks, but overall it ties a pretty
nice fly; albeit lighter than the traditional tie. Definitely worth
checking Clearwater’s inventory as their chili pepper necks
vary a bit in shading and color… 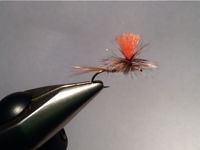 This final parachute adams was tied with a grizzly hackle
from a Whiting neck. I partially colored this feather brown
with a sharpie to see how it would compare to the naturals…
It’s not as sexy as tying with the other natural colored
feathers, but it does a damn nice job imitating both brown and
grizzly with one feather and could certainly work well for tying
with one feather.

Overall, I don’t think anything beats the traditional use of
one grizzly and one brown hackled mixed together. However
cree comes awful close and as I mentioned, it makes tying
tiny flies that call for griz/brown hackle easy. I do think all
these colors and variations look better (darker and colored) on
the cape. Once selected and tied, they all are lighter in color.
So there you have it. Hopefully that cleared some questions
up regarding cree hackle and substitutes for the elusive beast. 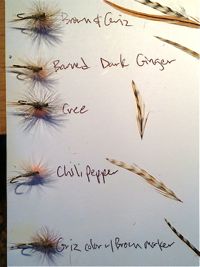 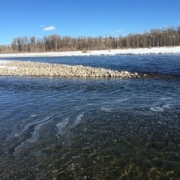 The weather lately has left many of us in Jackson Hole scratching our heads. The past couple of days feel like spring; temperatures have been hitting 50 and the snow in the back yard is melting quickly. Heck, we had happy hour beers on friday outside on the deck at Hayden’s Post. Naturally, the warm weather has folks with fly rods itching to get out on the water. I gave into temptation today, hitting up a stretch of the Snake river. There were quite a few folks out with the long rods. The warm day got a good midge hatch going and I saw numerous fish rising in slower water. I managed to catch a couple of nice cutthroat trout before the sun dipped behind the mountains. 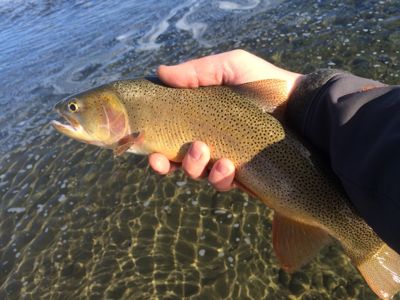 A nice cutthroat comes to hand after falling for a midge pattern. Warm weather has fish feeding 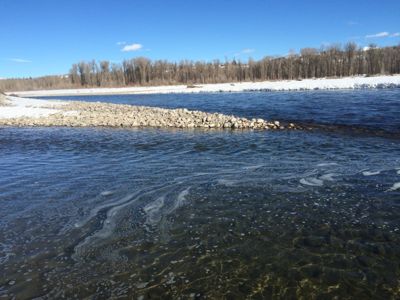