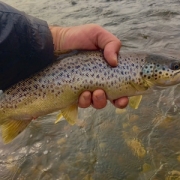 Yesterday was one of those days to remember. My friend Nick and I headed north out of Jackson to fish. While driving through Grand Teton park we saw our first Grizzly bear. We got to watch as the fuzzy bear fed in the grass up near Pilgrim creek. We drove on, already saying our day was made and we hadn’t even fished yet.

As we drove slowly down a dirt road on our way to the river, I glanced to my left and saw a big grizzly grazing out in the field beside us. We stopped and watched for a good 10 minutes; just us and the bear. Man what a day! 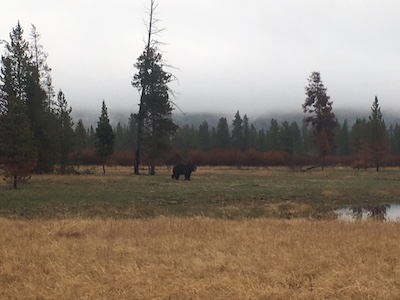 Eventually we got fishing, working our way down stream. I chose to swing streamers while Nick focused on nymphing. We spread out a bit on the water and I continued down hooking a couple of fish.  I hooked another nice fish- a good size Yellowstone Cutthroat trout. As I was bringing the fish in, I noticed Nick walking down river toward me. He caught up and offered to take a picture for me. 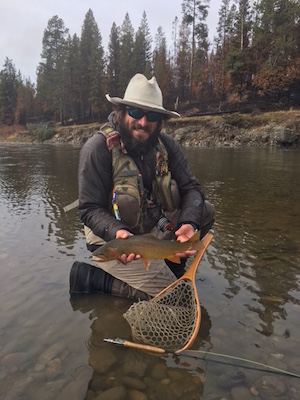 After a few pics, I stood up and thanked him. Then I saw that about 30 yards behind him was yet another Grizzly. This guys had just swam across the river right behind us and was now walking across the gravel bar. We turned and watched; remaining remarkably calm. Fortunately this guys didn’t mind us and slowly lumbered on. WOW! So that’s 3 bears so far.

I managed to snap a few pics as Nick watches. Let me tell you, this guys was closer than he looks in this picture. 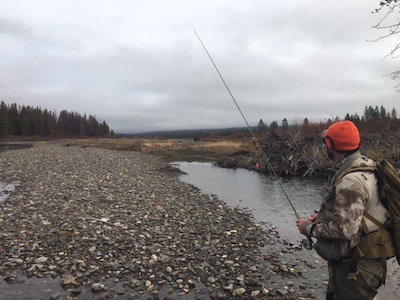 We continued fishing, albeit a little more on edge. As we made our way up river to explore some new water, we found ourselves slowly walking through the red willow bushes (yelling of course while we did this). As I scanned the country around us, I noticed a dark spot in an opening. Yep, another bear… we quickly worked our way through the bushes and back onto the open gravel. That’s four bears on the day!  As far as the fishing went, it was okay. We caught a few fish including a couple nice ones, but seeing these wild grizzly bears made the day one to always remember!

One of the browns that fell for my streamer. 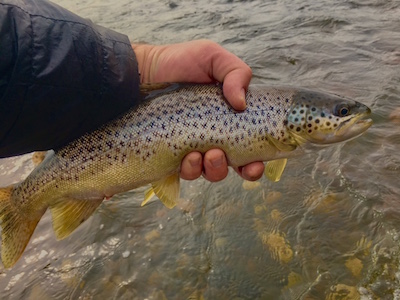 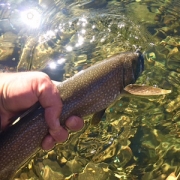 It’s late fall in Jackson Hole and things are slowing down. We had a pretty good dose of winter weather earlier this week, bringing snow to the valley. Fortunately things have cleared up and it looks like we’re in for some pretty nice fall weather for the next few days. I did a few fishing trips the past week on the elk refuge and the Snake. Both have some good surface action in the afternoon, mainly due to BWOs and the large October caddis. In the week to come, I hope to go do some fishing on my own for some colored up Brown and Brook trout. Additionally, I gotta start tying some flies for our upcoming Bahamas trip.

One of the beautiful rainbow trout Chris caught while fishing in Yellowstone with me last week. The fish weren’t huge, but they sure were fiesty! I’m gonna miss fishing the park when it closes for the season in early November. 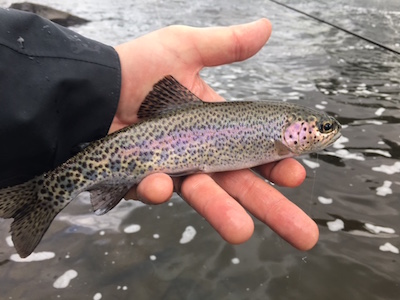 I took advantage of a sunny day to fish for Lake trout in Grand Teton National Park. This time of year Lakers come into the shallows to spawn and can be taken on flies. While they’re not the most energetic fighters, it’s nice to change it up now and then and fish for them. 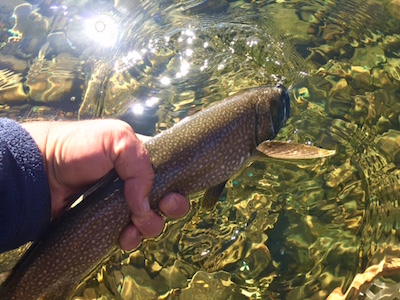 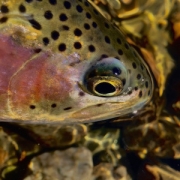 Holy smokes it’s October. Summer has disappeared around here making way for fall; one day is warm and sunny, the next it’s winter with blowing snow. For those of us who love fishing, fall is prime time. Fish are feeding heavily in preparation for winter, crowds are gone and brown trout take swipes at streamers.

I’ve continued to be busy guiding visiting anglers. For the most part, days have been really good with folks catching some nice fat cutthroat trout. Last week was challenging thanks to several days of snow and cold temperatures. After two days of tough fishing, Richard finally got into some good fish on the Snake. Hats off to him for keeping a good attitude and sticking with it!

In addition to the guiding, I also had to frame and hang paintings for my art show at the Snake River Brewery. I’m pleased with how things look and the paintings will be up though December. We’re having a reception/opening there on Wednesday (the 12th) from 5- 7. Stop by if you’re around and say hi.

Guides’ day off. I had the pleasure of fishing with Bill and Fred last week. It was fun sharing the boat with these guides and listening to their stories about guiding in the valley. And it was also AWESOME to fish from the boat! 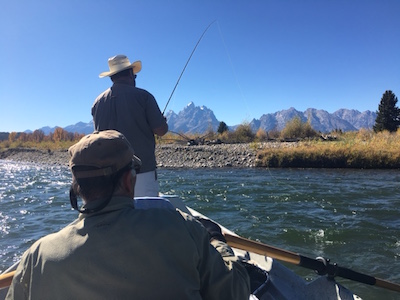 One of the nice cutthroat trout that was feeding on emergers on the Snake. Super fun day floating Brad and Dennis; it took awhile to make it happen, but the fishing was spectacular and the guys had a special day 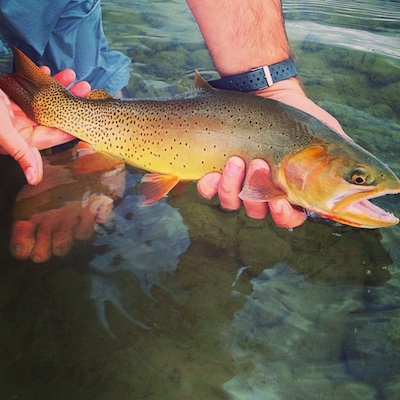 Richard shows off a foul weather trout. The weather threw Rich a curve ball, snowing on him during his days fishing with me. After two really tough days on the water, Richard stuck with it and found success on the Snake. 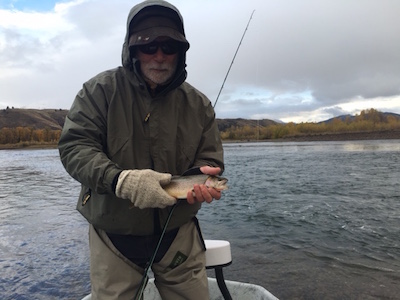 A few of the painting that are hanging at the Snake River Brewery. 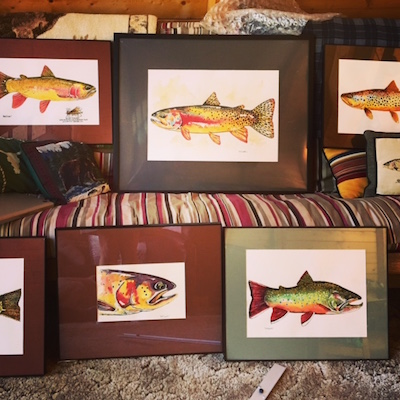 Pretty colors on this rainbow. 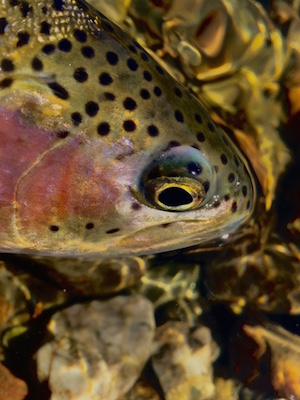