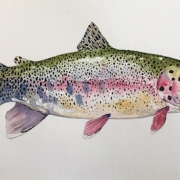 Here in Jackson Hole, the first few weeks of 2017 have been cold and snowy. Temperatures dipping to around 30 below and several feet of snow have have meant a lot of time indoors. I’ve been staying busy tying flies, building some cigar box guitars and opting to capture trout with watercolors rather than more conventional fly fishing tackle. 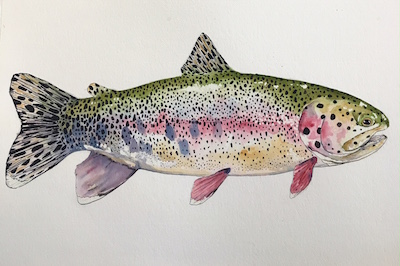 A new watercolor- “Fall River rainbow” 16×24. While subbing HS art class, I was able to work on several new paintings including this one.

That said, last Saturday I took three crazies from Michigan wade fishing on the Snake. Despite the fact that temperatures barely got above 0 during the day, Sean, Tim and Sean wanted to say they fished the Snake while visiting Jackson. We found a little water that was open and free of ice and worked it until feet and fingers were cold. The fish didn’t eat our nymphs though and after about an hour, fly rods were traded for pulls of whiskey and we retreated back to the truck. Never have i guided in such cold weather and I don’t plan on doing it again…. In the weeks to come, as days start getting longer (and a bit warmer), I’ll continue the winter fishing, both for fun and with clients.

Happy New Year everyone! Hope 2017 treats you well and you
have some fun fishing your favorite waters. Things around here at
Teton Fly Fishing world headquarters have been pretty uneventful
lately. Jamie and I made a trip back to PA to spend Christmas with
family and just recovered from a fun weekend celebrating new
years at the fishing cabin with friends. I’d like to tell you some
fishing happened, but truth be told, it’s been cold and snowy…

Most of my free time the past month or so has been spent working
on the cabin. My friend Dave (master carpenter) is helping me with
a big remodel project- some new windows, doors, sheet rock and
bathrooms. All of this will make for an even nicer cabin stay for
fishing guests.

In the weeks and months to come, I plan on getting back on the
water and fooling some trout. As some of you know, the Snake can
fish decent in the winter months. A lot has to do with finding some
productive holding water for our native cutthroat trout and
mountain whitefish. Keep a look out for slow, deeper runs. These
often hold quite a few fish and can keep an angler busy. More to
come in the next few days on winter fly fishing the Snake.