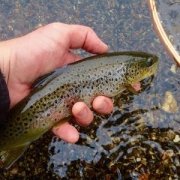 We knew we were in for a great day when we stumbled upon a bear-jam in GTNP. Keeping tourists, locals and rangers gawking was a female grizzly bear and her two cub; seemingly unbothered by the chaos and rain. After a little bear viewing, Matt and I headed north to Yellowstone National Park. This time of year most people fish the Firehole for good reason. We had other plans though. Lewis lake and river were calling and we were answering.

The Lewis and I have always had a love/hate relationship. I’ve had some great days on it, mostly in the fall when the brown trout are angry, but I’ve also had moments of glory other times; when trout rise to hatching mayflies and caddis. With this in mind, we spent most of the day fishing the river. Unfortunately there wasn’t too much going on. We fished and explored some great water and I did manage to catch two browns on nymphs, but we walked away wondering where the fish were. After having lunch, we drove back to the south entrance and hiked back to where the Lewis flows into the upper Snake.

The Snake was a high, muddy mess, but the Lewis was clear. We wandered up river for a while, seeing nothing but spawning suckers. Finally I managed one nice Cutthroat on a streamer, but again we were a little dismayed by the lack of trout. We ended up back at the confluence and Matt hooked up with some nice cutthroat trout and whitefish. After we both finally called it quits, we hiked back to the truck. Across the river in a meadow we spied another bear. After it disappeared into the willows we called it a day and headed home. I gotta say, despite the slow fishing, it was an awesome day. There’s something nice and refreshing about wandering wild country in the rain. Can’t wait to do it again!

Matt fishes some nice holding water. Nothing was holding though.. 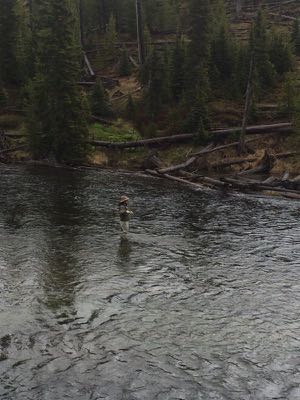 Never get enough of the brown trout.. 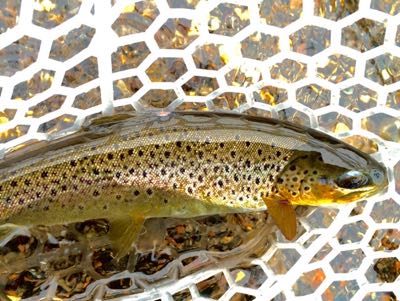 This tall trickling waterfall was the highlight of my day. Just one of the many surprises Yellowstone offers 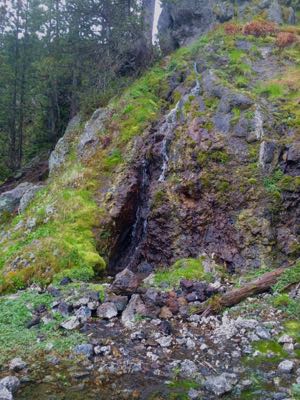 Breaking the ice. Nymphing a fast, deep run got this little guy. 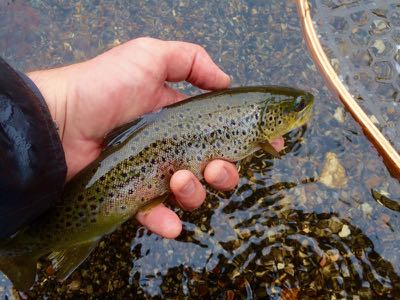 Wet. That’s the way things have been around here lately. River
flows have gone up and dirt roads are muddy.

Last week, I had the pleasure of taking Tom and his son, Ben out
for two days on the water. The guys were celebrating Ben’s recent
graduation from Uof New Hampshire. Due to high waters around
Jackson, we hit the road and stayed at the Teton Fly Fishing cabin
in Dubois. While there we fished for rainbows in a local stream, and
despite the rain, sleet and snow, Ben hooked up with a few nice
fish and landed one beauty. The next day we headed to the Big
Horn for a float. Again we battled some lousy weather but the guys
were champions! Some BIG fish were hooked; fish that caught Tom
and Ben by surprise, taking off up river, down river, jumping, etc.
Only a few were landed, but the guys had a blast!

Yesterday Jamie and I headed up into the hills hoping to fish a
small cutthroat lake. I was excited, Jamie a bit sluggish after a
Saturday spent at the Brew Fest on the town square. We managed
to get within a mile or so of the lake, only to be shut down by deep
snow covering the road. We debated hiking on, but with a steady
rain falling, ended up bailing and taking a drive through Grand
Teton Park looking for animals.

It looks like the wet weather is on its way out. Have a few fishing
trips planned this week so hopefully I’ll have some reports and
photos in the next few days. 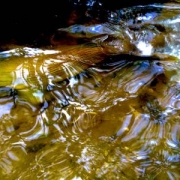 Salmon flies are mythical beasts of bugs in the fly fishing
world. Measured in inches, these stoneflies migrate to the banks of
some rivers in the greater yellowstone area, exciting fish and
anglers alike. I’ve never properly fish a salmon fly hatch, always
arriving too earlier or late to the scene. This year, due to an early
emergence, I was on it. First fishing the Henry’s Fork on Tuesday,
then returning on a solo camping/fishing mission Thursday and
Friday. It seemed my timing was right, fishing just above Ashton
and catching fish on big rubber-legged nymphs and bushy dry flies.
Did the hatch live up to its reputation? Well, yes and no. It wasn’t
exactly a fish catching free for all, but it was pretty good and has
me yearning to go back. I’d say I had to work for my fish, but was
rewarded plenty, especially when I hiked into a deep canyon away
from the crowds and fished size 4 foam patterns to the browns and
rainbows lying in wait in fast pocket water. Below are some
pictures…

Salmonfly nymph found crawling to the bank. Unlike
mayflies, stoneflies crawl to the bank before emerging. 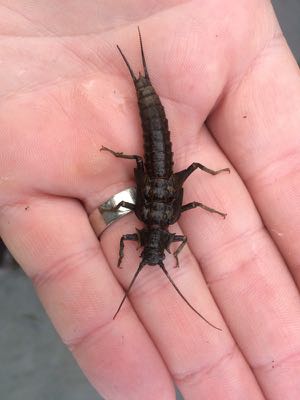 A rainbow in the hand. 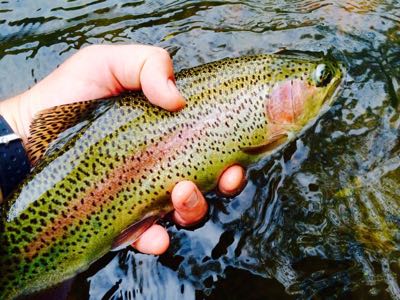 You can’t fish this hatch without expecting some vistors
crawling on you. 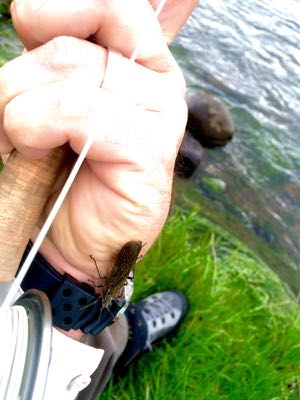 Rise and Shine. After spending the night in the back of
the truck, I was up, making coffee and off to another stretch of
water.

Sometimes the nicest fish lie tucked in on the bank
awaiting a clumsy fly to flutter down. Unfortunately for this guy,
the fly was fake! 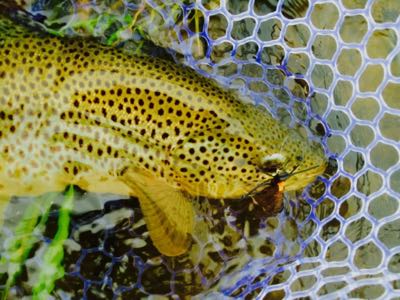 The spots on a wild brown trout are unreal! 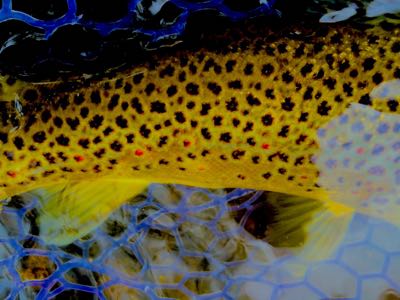 A view of the river. Getting down to it was the easy part.
The trek out made the blood pump!

The getaway; this male brown trout was excited to get
back to faster water. 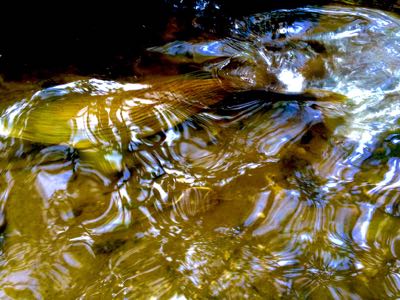 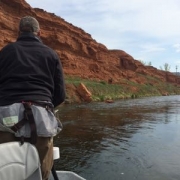 Looks like we made it through another winter here in Jackson Hole. Spring came early this year and overall the weather has been pleasant. Currently area waters are running high and muddy with melted snow pack. I expect that we’ll be fishing rivers earlier this year barring some crazy May weather. Right now, unless you’re headed to a regional tailwater, the best fishing’s gonna be on area lakes. Most are free of ice and the ones that aren’t will be soon.

Over the past week I spent time teaching and fishing. My friend Matt and I did a cool illustrated poetry contest with the middle and high schoolers in Dubois; a great experience. Being the smart guys we are, we also allowed ourselves a full day there to fish. Hitting up some lakes, we pitched streamers to brown and rainbow trout. I can’t say that the fishing was exceptional, but we did catch some fish and the weather was beautiful; what more could you ask for?

Matt ties on a new fly in perperation for fishing the outlet of this beautiful wyoming lake. 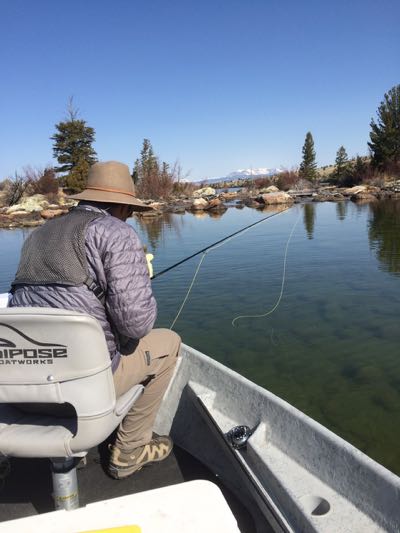 Then, this past weekend, my friend old friend Brandon, came up to the cabin for a quick reunion fishing trip. Brandon and I have been friends since 8th grade (i think), playing together in a HS band we called Fuzzbox and sharing a love of fishing and music. Fortunately we’ve stayed in touch, and with him and his family residing in Colorado, we manage to hook up ever now and then. Knowing we only had one full day of fishing together, we managed to rally, waking up at 5:30 (after a long night of whiskey inspired electric guitar rocking) and hitting the road for the Big Horn river in Thermopolis. After a slow start, we switched to nymphing with leech patterns and began hooking nice rainbows. Throw in a great BWO hatch and we had the perfect day on the water together. Hope we can do it again.

Brandon shows off a pretty Big Horn rainbow. Afterword, he asked, “are there any small fish in here?” 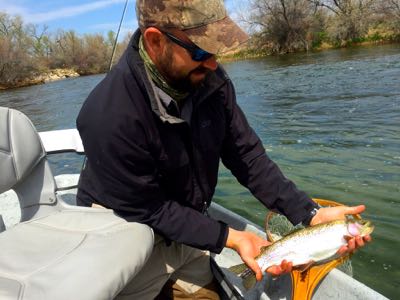 Working a streamer along a pretty band of red rocks. If you look closely you’ll see a horse watching us.. 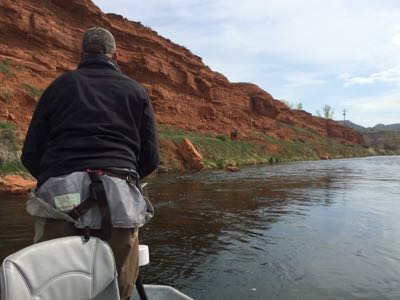