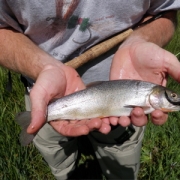 My apologies for the lack of posts lately. The current
fishing conditions have been less than inspiring and I’ve been
waiting until I could write something upbeat. Fishing here in
Jackson Hole is tough at best and impossible at worst. The
good news is that we seem to have finally transitioned to
some genuinely nice weather. Sunshine and temperatures in
the 70s have reminding all of us why we choose to endure 8
months of winter. The weather has also spiked snow runoff,
raising all major waterways around here to near flood
stages.

Folks have been asking when the fishing’s going to come
around and I honestly can’t say. Much depends on the weather
and how fast our huge snow pack melts. I will say that we are
at least a few weeks out before anything really starts shaping
up.

Despite these hard conditions, I did a few fishing trips this
week. I warned folks of extremely tough conditions, explaining
that it would be damn hard to hook anything, but that if they
still wanted to get out and cast a fly rod and learn about fly
fishing, we could do morning walk in trips on a smaller stream.
Declining my offer to refund deposits, some eager folks
decided to go anyway and we ended up having some fun
mornings. More importantly, after pounding the muddy water
with big nymphs, a few cutthroat trout were landed, allowing
my clients to experience the thrill of catching a native cutthroat
trout on a fly. I’m glad everyone had fun and I give them a lot
of credit for their perseverance and determination.

Here’s David showing off a cutthroat that fell for his dead
drifted Black and Red. Not the biggest, but a fitting reward for
his casting. Nice work David! 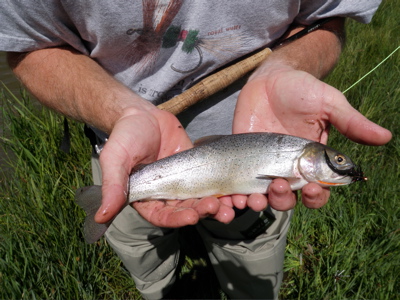 Having just spent a week back east in PA enduring record heat,
crazy traffic and a funeral, I can tell you it’s great to be back in
the mountains of Wyoming. While most of my time was spent
attending family functions, I was able to sneak in a little fly
fishing.

My friend Kurt and I chose the hottest day of the heat wave to
head up to Spring Creek, PA. Fortunately, as we worked our
way through the thick forest and into the stream, the
temperature cooled considerably. I can’t say that the fishing
was fantastic; seems we just missed the sulphur hatch. But we
were able to hook quite a few modest size brown trout on
nymphs and compra-duns. The biggest fish of the trip came in
the form of a sucker who momentarily fooled us into thinking I
had connected with one of the legendary brown trout that
Spring Creek is known for. The following morning we spent a
few hours on nearby Fishing creek. While we only managed
one trout (nice work Kurt), we left believing that with a little
more knowledge and some cooler temperatures, Fishing creek
could probably treat us right.

Overall, it was good trip. I caught some fish, eat some
cheesesteaks and spent quality time with family. And while it’s
never fun to attend a funeral, it was nice to pay respects to my
Grandma; a woman who never minced words and made the
best meatballs in the world. 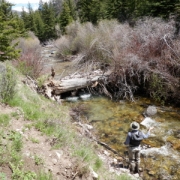 Here’s a photo from Friday’s mid-day fishing adventure. Sure
was nice to see blue sky and sunshine. 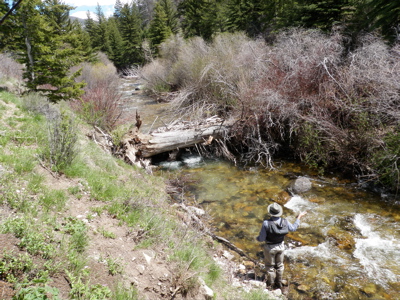 Next week I’ll get to try my luck on Spring Creek, one of
Pennsylvania’s legendary trout waters. Joining me (and guiding
me to glory) will be my friend Kurt, a guy I’ve grown up with and
spent A LOT of time on the water with. Usually it’s me pointing
out fish for him, so it’ll be nice to reverse roles; especially while
fishing a PA river on a warm June evening.

I’ve only fished Spring Creek once while doing a stint at nearby
liberal arts college. We fished it on a cold fall afternoon, trying to
convince its brown trout to take our streamers. I think I caught a
fish or two, but my memory is foggy. Anyway, I’m excited to
visit it again and test its reputation. Sulfurs and caddis are being
tied and stockpiled in anticipation of a fine evening hatch, but I’m
secretly plotting to cast BIG bunny streamers once night falls.
Should be fun!