Like many fly fishers out there, I am a huge John Gierach fan. It began when I picked up his book, “Sex, Death and Fly Fishing” in college. Reading it confirmed my suspicions that some people do indeed reject convention and spend the majority of their waking hours pursuing trout. Since then, I’ve read all Gierach’s books, some more than once, and look forward to his Sporting Life columns in Fly Rod and Reel magazine.

While perusing the Trout Underground site (a great blog) the other day, I came across a link to an interview with John Gierach. Gierach doesn’t seem to do many interviews, so when I stumble across one, I read it. It’s nice to learn a little more about the man who pens such great fishing tales.

Check it out if you’re a fan: Interview

Just got in from an outing on the Snake. The day won’t go down
in the record books, but it was nice to get out and wet a line. I
expected conditions to be fairly lousy, but I didn’t expect ice to
be floating in the main channel…. although it makes sense. After
walking a good mile up river with Sage, I post-holed my way to
the bank and rigged up my rod. I opted for the usual, a double
nymph setup with a twist of weight. The floating ice made it
challenging to get a good drift in the fast, deep current. Every
once in a while though things would work out and I’d feel a bump
on the end of my line. After about an hour, I reeled up; content
with the 2 cooperative fish that found their way to my hand. 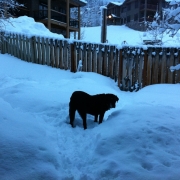 Well, it happened. After what seemed like months of waiting,
we got our first proper snowstorm here in Jackson Hole. I’d bet
there’s about a 14 inches here at the house, and it looks like the
mountains got several feet. Needless to say there were quite a
few folks “sick” yesterday; both school kids and adults took
advantage of some great skiing. Here’s a shot from this morning
of Sage assessing things in the backyard. 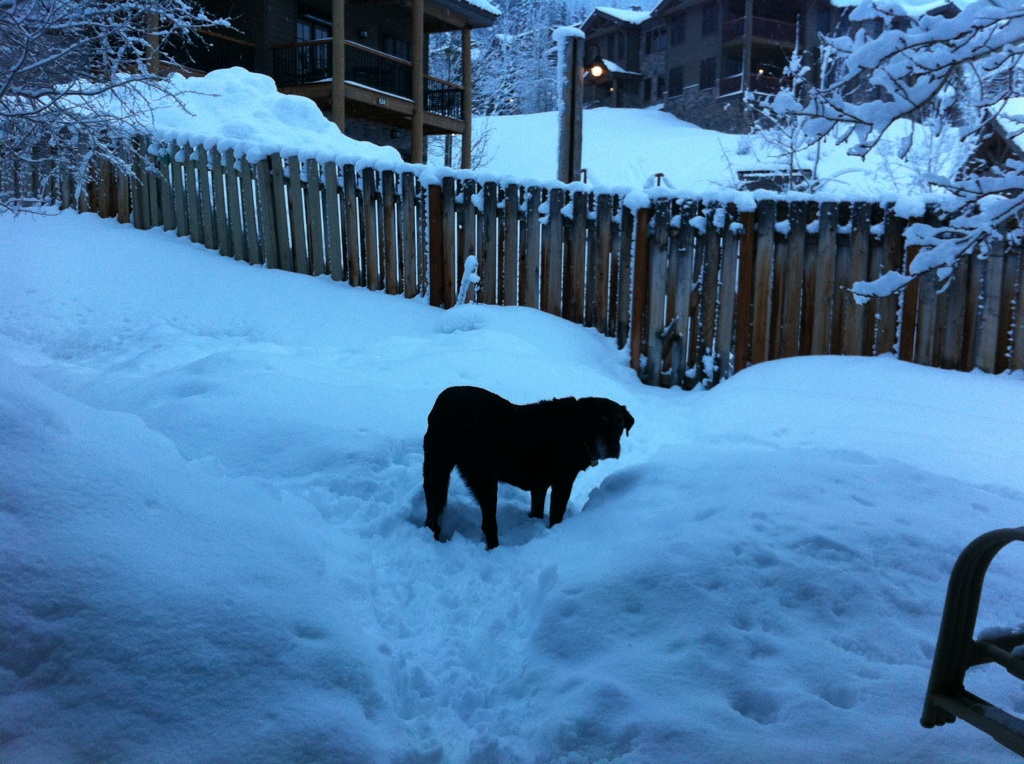 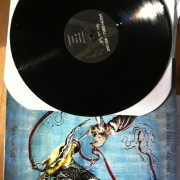 No snow and not much in the way of fishing (or skiing).
That’s how it’s been around here lately. And while it hasn’t
been dreadful, a little new snow would certainly boost morale,
both for folks around town and the trout that depend on a
robust snowpack for survival. Not time to worry yet though,
we still have a lot of winter left.

I’m been keeping myself busy around here tinkering with
various art projects and playing some music, both on the guitar
and a newly acquired ukulele. Speaking of music, I saw a great
band last night- Jason Isbell and the 400 Unit at a local
watering hole. The music itself was fantastic; alt country fueled
by whiskey and struggle. Unfortunately the venue was less
than adequate for such a great band. Somewhere along the
way, live music has taken a back seat to superficial chit chat
and constant cellphone checks. I watched the show intently, as
did a quarter of the other folks in the bar, but it was clear that
$20 ticket or not, most folks were there to socialize and show
off their first ever attempt at facial hair. (Yes, I realize I
sound like a curmudgeon) Regardless, it was great to see some
rock n’ roll in a mountain town that’s become increasingly more
interested in techno music and energy-drink fueled dance
parties. If you like rock n’ roll and alternative country music,
do yourself a favor and checkout Jason Isbell.

Couldn’t resist the vinyl…..came with a free digital album
download as well. 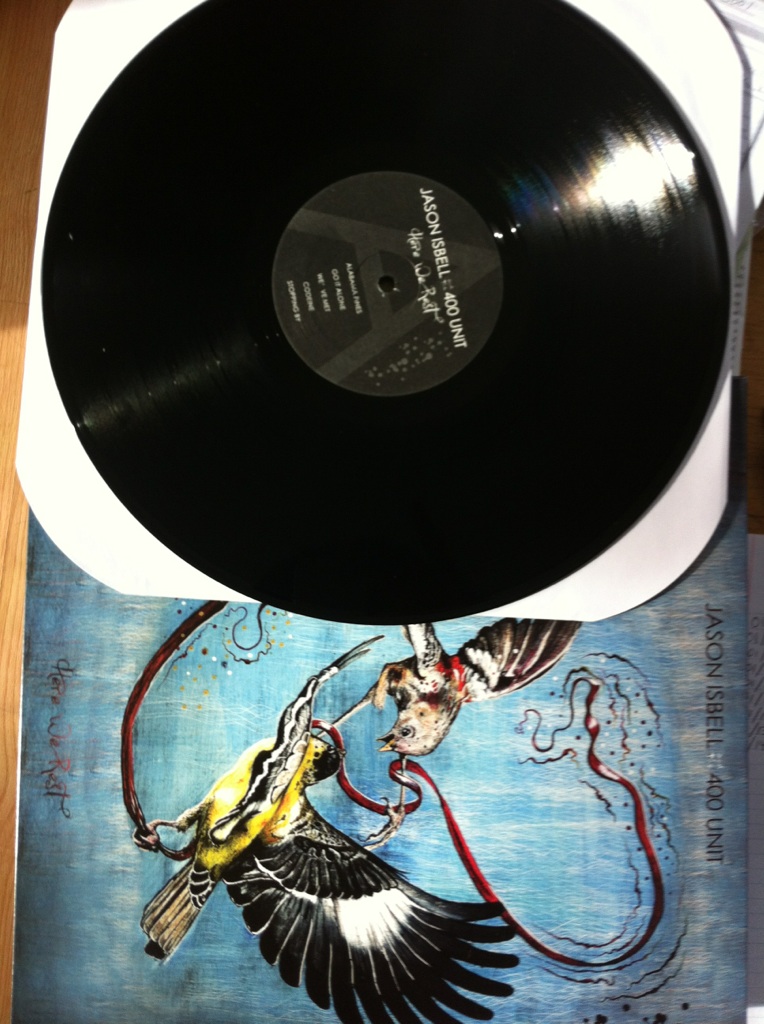 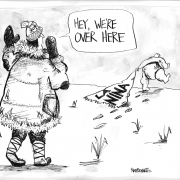 After all the early season hoop-la regarding the return of “La
Nina”, those of us in the rocky mountain west are left scratching
our heads. Snow around these parts is lacking. I haven’t even
gotten out my winter boots yet, let alone the skis. I’m beginning
to think I’m trapped in a “Groundhog Day” situation as each day
is the same- sunny skies with temperatures in the 30s….Heck
there are still Grizzly bears reportedly roaming up in the park.
Strange. Here’s my cartoon from this weeks paper. I think it
sums things up. 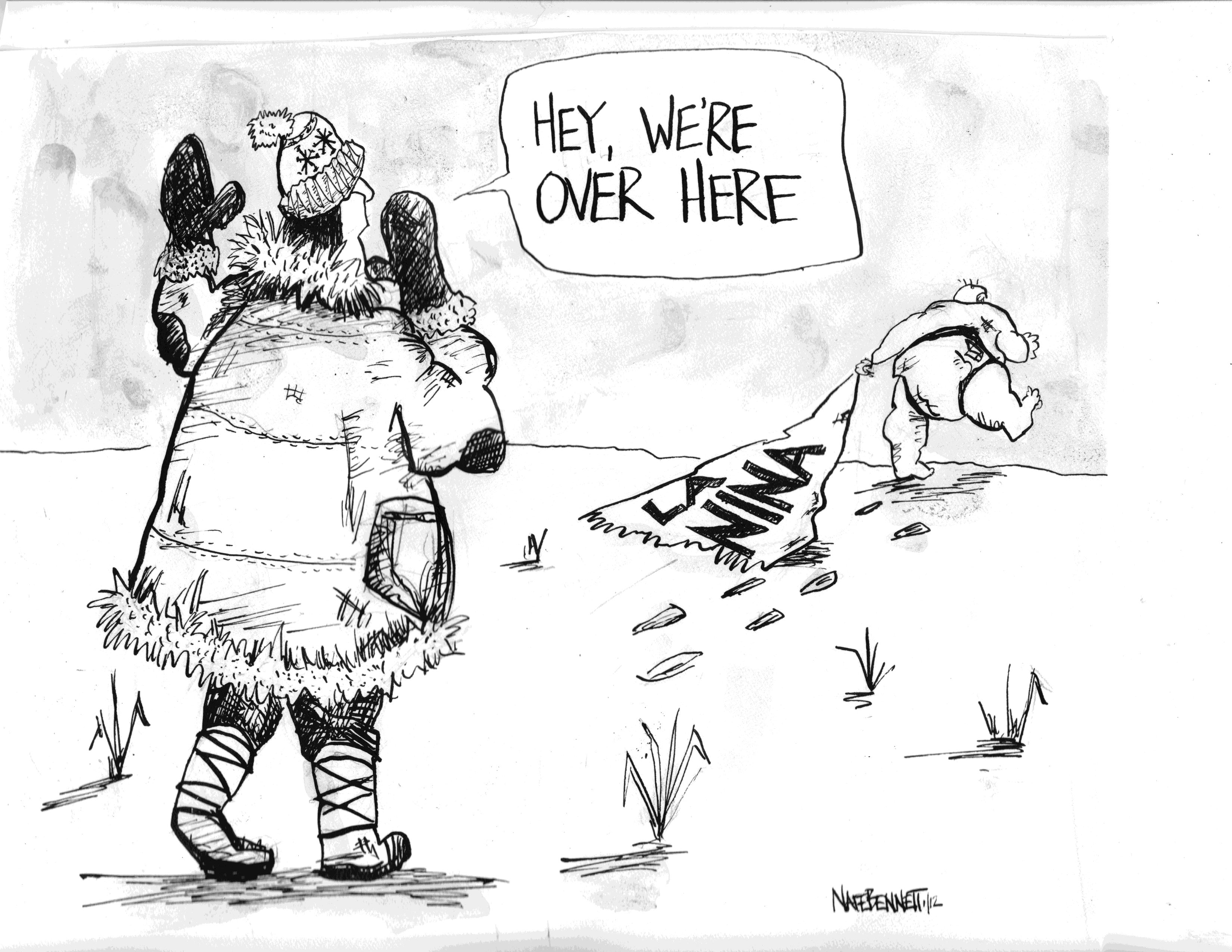 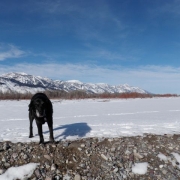 There are those that seek trout in fair weather, opting for
shorts, shirtsleeves and sandals. Then there is another breed
of angler. One who foregoes the ski lifts, preferring to tramp
through ice- crusted river bottom, donning Gore-Tex and a stiff
6 weight; risking hypothermia, wind-burned cheeks and
clumps of snow on their felt boots that resemble high heals.
These anglers are a hardy bunch; more concerned with getting
out, rather than how many fish they catch. Catch fish they do
though. Mainly on nymphs, however the occasional midge
hatch keeps things on the surface interesting.

I can’t claim that winter fishing around here in western
Wyoming is great; a fish here and there (whitefish or
cutthroat) will do, but casting a fly rod all while watching a
moose feed on willow buds across the river channel sure beats
sitting inside. These winter days, fish or no fish, leave the
astute winter angler wondering why no one else is out.

Here’s a shot of Sage supervising the winter fly fishing
along the Snake. Not bad for being 13. 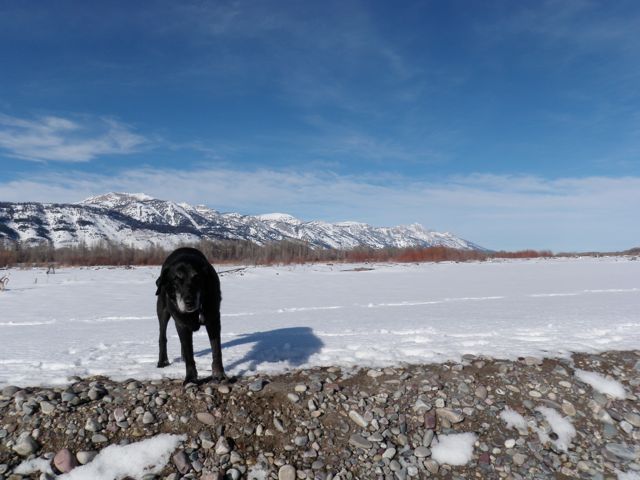