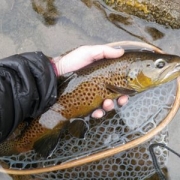 Just returned from the annual Bennett/Daly Flaming Gorge
fishing trip. My friend Matt and I started going down to Utah a
few years back, partly to fish the beautiful red canyon walls of
the Green river during uncrowded times, and partly to escape
the wintery weather in Jackson. 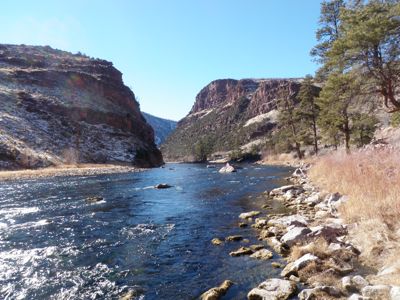 This year, we lucked out and had some great weather;
sunny skies and warm temperatures in the afternoons meant
fishing without jackets and gloves. Most of the time fishing,
we relied on nymphs and streamers, although we did have an
opportunity to fish a brief (30 minute) midge hatch that
seemed to bring every fish in the river up. As with any proper
fishing trip, there were moments of glory; Matt hooking a
beautiful Brown on a streamer, sight fishing size 22 midge
patterns to large, slow rising brown trout. 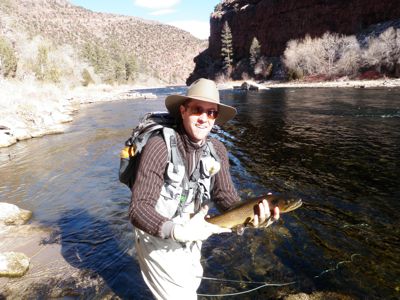 There were also moments of frustration; a thorough beat-
down I received on Sunday, when I hooked much more green
aquatic moss than fish. And lets not forgot the giant rainbow
hooked in a fast mid-river seam that eventually came off
(yes, I do believe it would’ve been the largest trout of my
career). Perhaps the finest moment came in the 11th hour,
shortly before we needed to head north back to Jackson. A
fantastic midge hatch erupted, bring fish up to the surface all
over the river. I watched a beautiful brown rise deliberately
just feet from the bank, eventually fooling him with a
homegrown midge pattern. Then, I watched Matt hook up
several times down from me (the aerial brown trout
acrobatics were a dead giveaway). 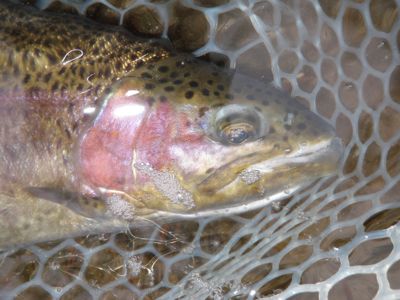 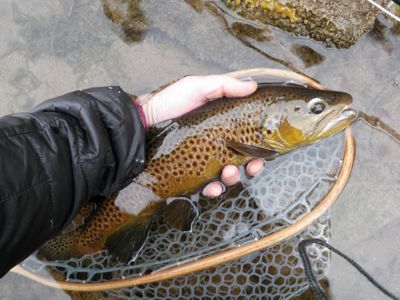 After the hatch slowed, we hiked out of the canyon
agreeing that we couldn’t have asked for a better end to
another great trip!

Back here in Jackson Hole we are bracing for a winter
storm. Looks like the valley will get a couple inches, while
snow in the mountains could be measured in feet. Let’s hope
so. Snow translates to water, which keeps trout (and anglers)
happy. 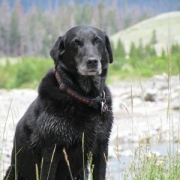 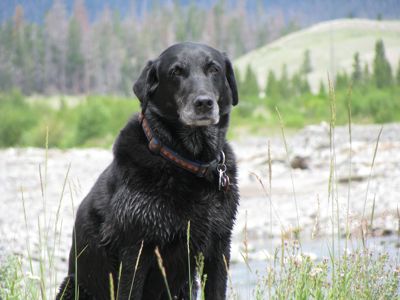 I’m sad to report that Sage, my constant K9 companion
passed on last Friday. Many of you came to know Sage over the
years, and while she didn’t join me on every guided trip, she did
tag along a lot when folks invited her. She was happy helping
guests, from friends to celebrities, find trout to cast to. Over the
years, she spent more time on cold trout waters than most
humans. In addition to Wyoming waters, Sage fished with us in
ID, MT, UT and CO. She also cruised the country, coming face to
face with alligators in Florida, buffalo and moose in Wyoming
and sea lions in California. Despite turning 15 this past
September, Sage continued to fish with Jamie and I through the
fall and demanded daily walks until the end. In the end, she
lived 15 years 4 months, a hell of a feat for any dog. Things are
lonely round here at the Bennett/ Teton Fly Fishing household.

Well we are off on 2014 and I can only hope it will be as good
(and fun) as the previous year. Exciting thing are happening
around here at Teton Fly Fishing headquarters; winter fly fishing,
fly tying, painting and trip planning for the upcoming year to
name a few. I can’t wait to take folks fishing on the great trout
waters around here in western Wyoming. Expect great fly fishing
related things to be reported here and stay tuned for regular blog
posts to get us all through the winter. Here’s to a great new year
and great fly fishing!