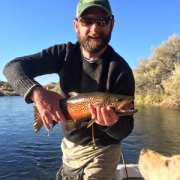 Taking advantage of a break in the weather, Lulu and I jumped
in the truck and headed to the Teton Fly Fishing cabin. The plan
was to stack firewood and fish. My friend Nick came over and
despite a night of good food and beverages, we rallied, getting up
early, attaching the drift boat and hit the road. We arrived at the
river shortly before 9 and found the boat ramp empty.

The first few hours of the float were lacking fish; nothing
feeding on top, chasing streamers or eating our nymphs. The
forecast called for sun and temps in the 50s, but we were in down
jackets getting blown up river. After fishing a few riffles that
usually produce, I suggested we drop anchor and eat lunch, hoping
that by killing time the bugs would hatch. As luck would have it,
the sun came out and it did warm up considerably! Nick started the
post-lunch fishing with two small beachhead nymphs and
immediately hook a decent rainbow and then a BIG brown trout! 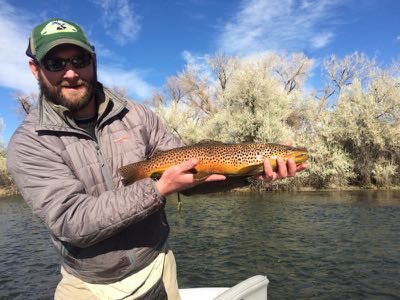 Now we were feeling good! He caught another big rainbow and
then handed the rod to me. I got a few more nice rainbows and
this is how the rest of our day went; fishing riffles with both
nymphs and small BWO dry flies. In the end, it turned out to be a
fantastic day with some beautiful fish being brought to the boat.
After the long drive home (we snuck in just ahead of a fast moving
snow storm) we celebrated with beer, whiskey and steaks on the
grill. Lulu got a few extra treats herself for being a great
companion. 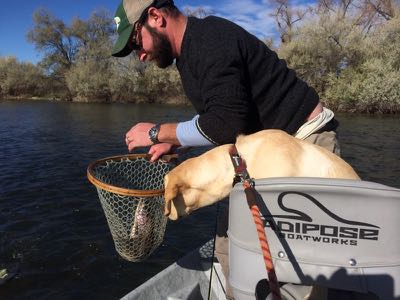 Netting a nice rainbow while Lulu tries to contain
herself 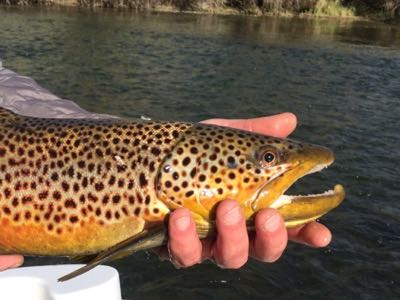 I don’t know if they come any prettier… a nice big male! 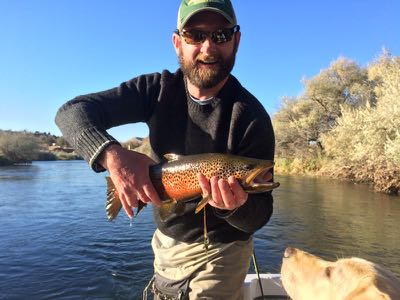 Nick is all smiles in the Wyoming late-day sunshine.
Lulu’s impressed

Over the past week or so winter’s arrived in Jackson Hole. We had
are first snow of the season in town and off season is in full swing.
I’ve been taking advantage of the cold, shorter days; catching up
on any number of things that got neglected over the past months.
I’ve dusted off the paint brushes and begun working on some new
pieces.

Lulu continues to do well, getting walks everyday and plenty of
time hanging out with Jamie and I. We’re over in Dubois at the
fishing cabin stacking firewood and doing chores in preparation for
the winter season. Temperatures are decent here and my friend
Nick and I are planning on floating the Big Horn over in
Thermopolis tomorrow. We’re hoping to catch some of the nice
browns and rainbows the Big Horn’s known for. Hopefully I’ll have a
report later in the week.