Had the Pleasure of fishing some folks from neighboring CO this
past weekend. Richard and his wife were treated to some great
Wyoming lake fly fishing, catching rainbow and brown trout on
various leech patterns. It was great to get the drift boat out and
spend all day floating on clear water in warm sunshine! In the
weeks to come, I am looking forward to more great stillwater
fishing in addition to some trips up to Yellowstone National Park
to fly fish. Reports up there indicate that the upper Firehole river
is holding its own. I expect some great dry fly fishing to begin on
it in the next week or so. Also, the Firehole canyon is a great
place to hit the salmon fly hatch in a few weeks. If anyone is
interested in a fun guided fishing trip, give a call or shoot an
email! 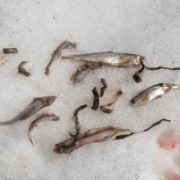 Many know that Lake trout are predatory, feeding on smaller
fish as well as many other things. My unscientific study
confirmed this the other day when I cleaned a Laker for dinner.
It seems this time of year smaller fish and leeches make up a
good portion of their diet. So for all of you getting out this
upcoming weekend to cast at cruising lakers, it might be a good
idea to fish white/blue/olive baitfish patterns and simple leech
patterns… 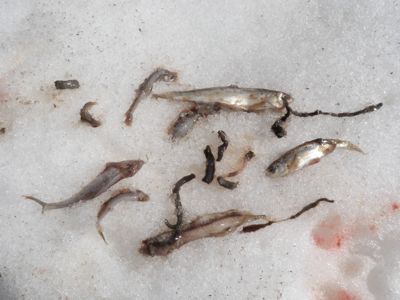 and yes, the grilled Lake trout was delicious 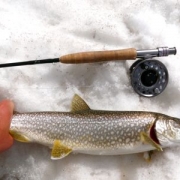 Every spring, as area rivers turn brown with runoff,
anglers turn their attention to the many lakes around here in
western Wyoming. As soon as ice comes off and waters
shimmer with hues of turquoise and cobalt, lake trout become
a viable fly rod option. 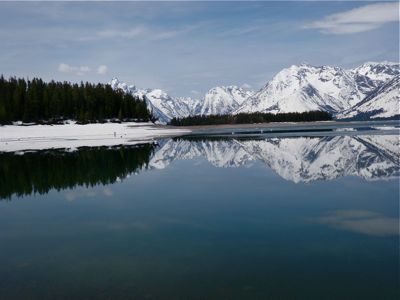 Ice off… Time to target Lake trout at Leek’s
Marina

Today we took a run up to Jackson Lake to see what was
happening. While still having some ice on it, there was quite a
bit of open water too allowing us to fish streamers on sinking
lines from the shore. Fish were caught and we were able to
cast without wearing down jackets (a first this spring!). While it
was exciting landing some good size lake trout, the highlight of
the day was definitely watching a Grizzly bear walk along the
oxbow of the Snake river. 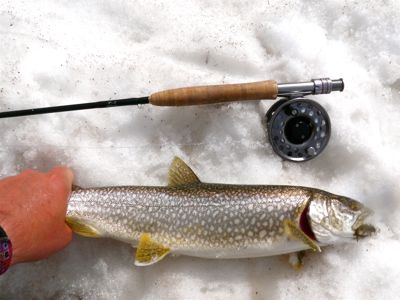 With warm temperatures making a comeback, many rivers
and streams in the region are becoming unfishable. Fear not
though, if you know where to go, there are plenty of good
fishing options around. In addition to lakes, Yellowstone
National Park will open for the 2014 fishing season next
weekend. If you’re visiting the area and want to fish this or
some other cool trout waters, give me a call.

Had the pleasure of fishing with long time friend, Kurt, the
past couple days. After a long hiatus, Kurt managed to sneak
out for a long weekend. We divided time between the Dubois
area and Jackson. While many area waters are blown out due
to spring runoff, we had a few tricks up our sleeve. The best
day by far was on the Bighorn, where Kurt experienced some
fine tailwater fishing. The wind proved challenging on some
other waters, but we managed a few fish here and there,
making the most of our three day fishing adventure. 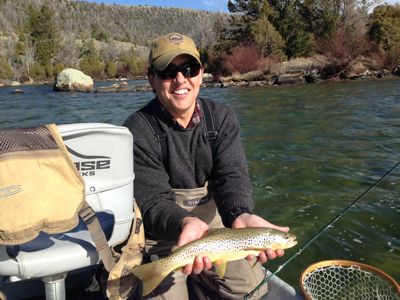 Our day on the Bighorn was beautiful. A lot of fish were
caught subsurface, but by late afternoon, fish were rising all
over the river. Kurt decided to hop out of the boat after seeing
several sizeable browns feeding in this eddy. 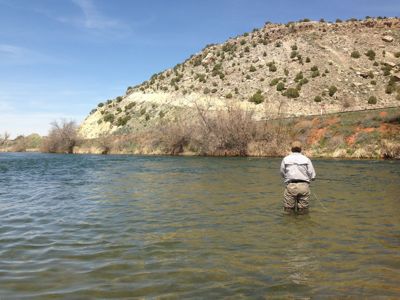 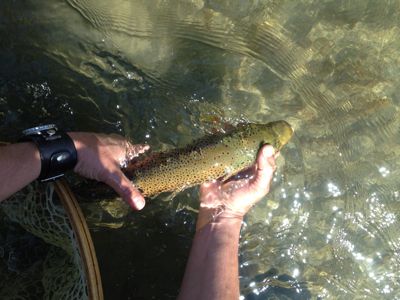 Rainbow that fell for a grey Ray Charles… 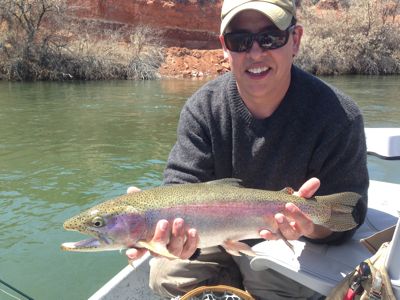 On the drive back to Jackson, we swung up to the oxbow
in hopes of seeing a Grizzly bear that’s been out and about.
Timing is everything, and we got to watch the bear feed
amongst the willows. His tracks were fresh…

Overall we had a great time and good to get out on the
water and catch up. Hopefully we can do it again next year. In
the meantime, I’m headed down to CO tomorrow to visit
friends and meet the newest member of their clan. Word is
there’s a few feeder streams that are fishing well. We’ll see….