Blog
You are here: Home / Blog / Hackle in hair- Noooo! 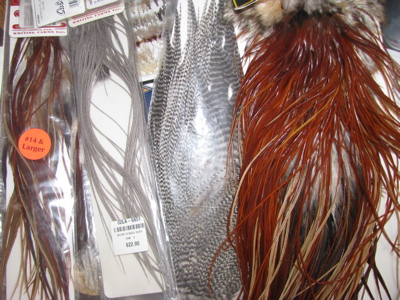 Hackle shortage because of a beauty crazy? Apparently so.
I first came across this story thanks to the Midcurrent
website, and have since read about it a few other times.
Apparently girls are putting long saddle hackle into their hair!
Being a naive fly fishing guide and out of the fashion loop, I
figured this story was much to do about nothing; a movement
about a few trendy girls in the big cities- an LA thing. Well,
turns out I was wrong.

While substitute teaching last week at the local high
school, I noticed several girls with long, grizzly saddle hackles
stuck in their hair; hackle that would be perfect for tying
stimulators and hoppers for our local cutthroat trout. Ah, say
it ain’t so. After inquiring as to where the girls got the hackle
(and explained that they work better on dry flies), I learned
that the feathers are readily available at our local hair salons,
and apparently quite popular. If this “trend” has infiltrated
Wyoming, I hate to think what’s going on elsewhere! This new
demand is creating problems for us fly tiers. The beauty shops
are buying all the hackle supplies and driving the price sky
high. Via the Angling Trade article: “[Salon owner Joy]
Douglas literally drove to Whiting Farms one night to lock
down as much product as possible. She claims that Dr. Tom
Whiting doubled prices on her overnight when he realized the
quantities she was willing to buy. She has since had a major
problem getting feathers and is trying to source from anywhere
she can. Her main sources are Metz and Whiting.”

You might want to stock up on hackle while you can. Let’s
hope this “fashion movement” fades to oblivion fast!

All things big and small
Scroll to top