Blog
You are here: Home / Blog / Heating up 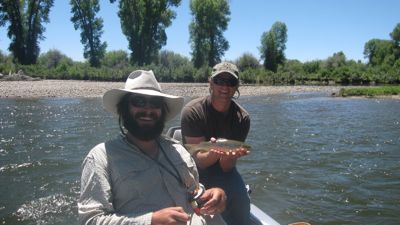 Well there is no doubt that summer has arrived. Temperatures this week in Jackson have been pushing 90 with LOTS of sunshine. I’ve been spending a lot of days down on the Green river, introducing folks to the brown and rainbow trout that reside there. We been fooling fish with dries (yellow sallies, stoneflies, big attractors) and nymphs. Each day it seems that more and more fish are looking up and rising to the many bugs that are floating by. Additionally, smaller streams are fishing well with dries. Snake river flows coming out of Jackson lake dam are about to be cut back to summer levels, meaning that fishing is about to get GOOD. The Wind river over in Dubois is also coming down and I’m looking forward to fishing some folks over there in the coming months.

Two days ago I had the pleasure of taking Devin and Charlyn from Utah, fishing on the Green. Charlyn, despite being 7 month pregnant, put on a clinic, catching numerous trout, including a really nice rainbow! Devin held his own, catching quite a few browns and whitefish (we deemed him the whitefish king, which I think he secretly liked). All in all a nice day spent with good folks. See you on the water…. 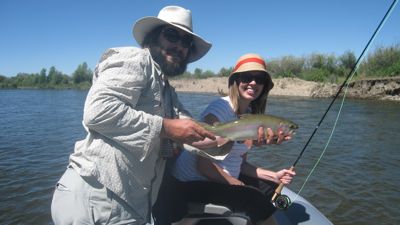