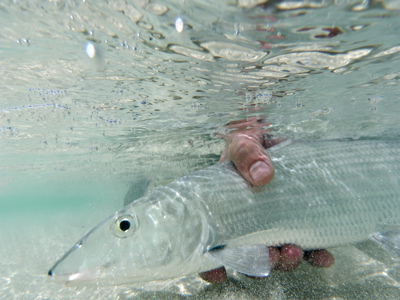 Heartbreaker. That’s the name I’ve given to Albula vulpes,
commonly known as the Bonefish. I came to this name while
strolling the sunburned flats, having been rejected yet again by
a shadow whose only prominent feature I could make out was
a small middle finger pointed in my direction as its owner
headed away from me with alarming speed. “Hmm. Did I put
the fly too close- maybe too far to the left? Hell, I don’t even
think it saw my fly. Of course it did- it’s swimming away you
idiot!”

I have never encountered another fish (save the Permit,
but folks seeking them know what they’re getting into) so
good at making grown men question themselves and their
fishing abilities; just flat out zapping them of any self esteem
they may have had. Yet at the same time, just when all hope
is lost, these fish can (and do) make you feel like a hero,
inhaling a fly and running out a hundred plus yards of line
from a buzzing reel in seconds. Not surprisingly, self esteem
suddenly rebounds, and for a minute or two you think that if
you were to die this very second, it would be okay, even
noble.

The 20 hour journey back to the Wyoming tundra gave me
quite a bit of time to reflect on Bonefish and the obsession that
spurs us on in pursuit of them, all while risking financial and
marital ruins. After spending two weeks in the tropics pursuing
these cold, heartless creatures, I’d like to think I learned a few
things, but overall, I’m left with more questions than answers;
Why does that big, single, cruising fish veer slightly to left of
where my fly has been patiently waiting? Heartbreaking, just
heartbreaking I tell ya.

In the end, I guess the only way to deal with such a fickle
creature is to come clean with yourself, admitting that even
though they break your heart, you love it and will happily sign
up for it again and again!

A pirate’s life for me..

A brown trout and a brown bear
Scroll to top